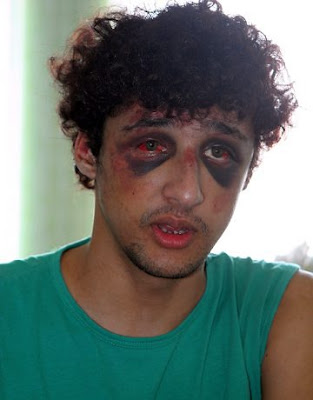 This is the face of gay-bashing.

According to a translation of local news reports provided by Made in Brazil:

O Globo Online has just reported today that 19-year old student Ferruccio Silvestro was beat up on the night of November 30th. Leaving a gay club in São Domingos, Niterói, Ferrucio was approached by three middle-class boys in their early 20s who screamed at him "We don't want faggots in our neighborhood." Ferrucio tried to run and hide at a nearby gas station, but the group of boys reached him, and kicked him to the ground, leaving him unconscious. The gay teen spent the last four days at the hospital, and is set to press charges tomorrow.

that's so sad. I hope whoever did that to another human being is put in jail for life

That is really sad and scary. :(

A Few Blogs of Interest