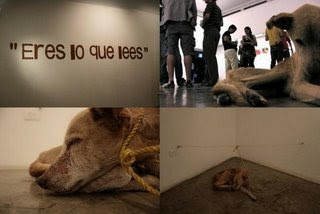 Costa Rican artist Guillermo Habacuc Vargas paid two children to find a dog in a barrio of Managua, Nicaragua for an exhibition he had scheduled there. In the name of art, Vargas then tied up the dog in a corner of the salon, denied it food and water, and waited for it to die. Habacuc told the daily La Nacion, “The importance to me is the hypocracy of the people where an animal is the focus of attention where people come to see art but not when it’s in the street starving to death.”

Habacuc has been selected to represent his nation at the prestigious Bienal Centroamericana Honduras 2008. Once this outrage came to light a petition campaign asking that he be denied that honor has begun. Please consider adding your name. The dog had a name, Natividad. Someone cared for it as best they could.

(Via A Welsh View)

wow. I'm at a loss. Not for words, but for where to begin.

Right there with you, Peter.

Signed the petition. Art? The artist suffers for his art.

Inhumane cruelty is not art. It's just cruelty.

I hope he dies a horrible death.

I suggest everyone MAKE art about what they would want to do to GHV, like this artist did:

A Few Blogs of Interest